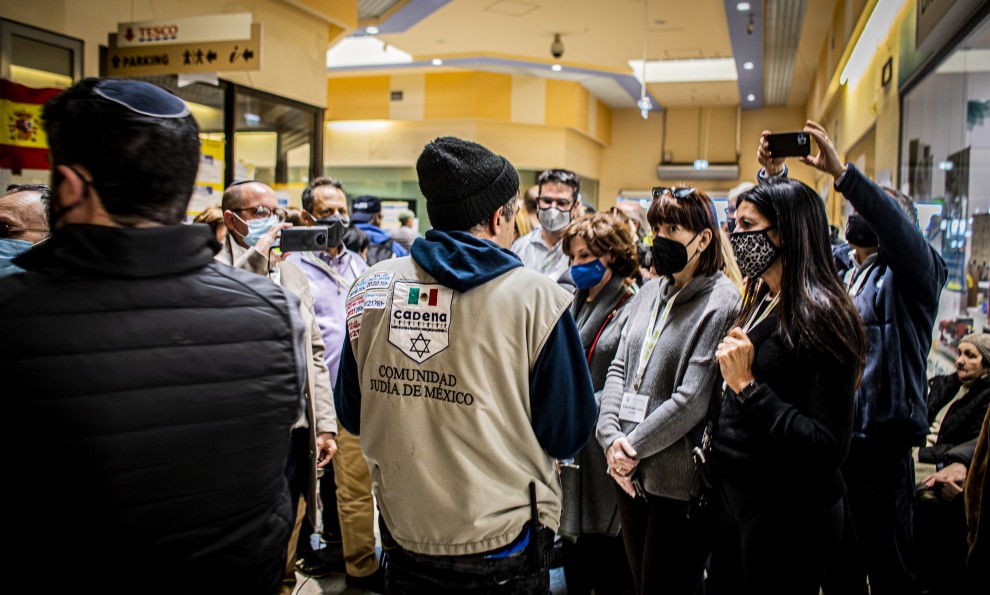 In the first organized mission of leaders of the North American Jewish community to the Polish border with Ukraine, more than two dozen representatives from eleven different Federations got an in-person look at the deepening refugee crisis spawned by Russia’s catastrophic invasion of its democratic neighbor three weeks ago.

Led by Mark Wilf, chairman of  the board of Trustees for the Jewish Federations of North America, and Eric Fingerhut, president and CEO of JFNA, the mission came to see first-hand the impact of the Jewish Federations’ emergency fundraising campaign, which has already reached $27 million, to provide immediate aid to Ukraine and its Jewish community.

Fingerhut called on the world to welcome Ukrainian refugees, promising that Federations will advocate for all countries to “welcome all refugees, of all religions and all faiths and all backgrounds,” just as Federations did in lobbying Members of Congress last week.

These experts outlined the staggering scale of the humanitarian crisis and the crucial role that both Israeli organizations and Jewish groups in Poland are playing in caring for the immediate needs of the refugees. Those who have documentation of being Jewish are enabled to make Aliyah, if they wish to do so. At the same time, food, shelter, and other basic necessities are being provided to everyone, regardless of their religion or background.

The following day, the group traveled to Lublin, where they visited a yeshiva that was destroyed by the Nazis, and which is now receiving funds from Jewish Federations to take care of the refugees. They then went on to the Ukrainian border near Krakow, where tens of thousands of refugees are streaming into Poland every day, and they witnessed them being welcomed and taken care of by Federation’s partners, the Jewish Agency and the American Joint Distribution Committee, as well as by a plethora of other relief agencies from around the world.

“The first thing that Jewish refugees are seeing is the flag of the State of Israel,” said Wilf, who is the son of Holocaust survivors from not far from the very region where the Federation leaders visited. “Our professionals are rescuing these people, along with so many non-Jews as well. We are truly being an or l’goyim (light to the nations) in doing this work.”

The refugees, many of whom had waited up to ten hours to make the brief 15-20 minute walk across the border, were almost all women and children, as men of combat age have stayed behind to take up arms.
“[They] don’t know when they’ll see their husbands, fathers, sons, and brothers again. The situation is very tense and the world is full of evil, but we also saw the good that people are capable of,” said Betsy Sheerr, who serves on the Jewish Federation of Palm Beach County’s board.

The refugees, who were lugging small suitcases and carrying young children, were loaded onto buses to go on to temporary housing in hotels, private homes, or on the floors of empty shopping malls.

"The wave of exhaustion and fear is only being met by an equal wave of humanity, of love and hope. In these darkest moments, you'll also find the brightest lights,” Noah Farkas, the president and CEO of the Jewish Federation of Los Angeles told Fox 11 News in L.A. “To be part of a system that's funding [efforts in Ukraine], it's a real privilege to bear witness to history," he said.

With the Purim holiday starting soon after the end of the mission, Rabbi Farkas reminded the participants that the Purim megillah is a “missive to the Jewish people with a call to action--Seek the good of [our] people and speak peace to all [our descendants].”

David Heller, board chair of the Jewish Federation of Cleveland, said that it was “heartwarming, although completely surreal,” to see the Israeli and other humanitarian organizations hand out diapers, stuffed animal, clothing, food, and even toothpaste to so many thousands of vulnerable and frightened refugees. He described it as “watching humanity at its best.”

Wilf called it a “most humbling experience to return to the hallowed sites upon which members of my own family were murdered, but this time, to join he global effort to relieve the pain of Jews and other populations who are suffering.”

“There is incredible suffering taking place and the fact that we as a Jewish community are able to take care of these refugees today is remarkable,” he added.

Jewish Federations already have three additional missions in the works, and are planning further humanitarian missions to the region in the coming weeks and months.