Rabbi Paul Kipnes was thinking about summer. With his team, the spiritual leader of Congregation Or Ami in Calabasas, CA, had a germ of an idea about a program for older high school students and college students whose camp counselor jobs and internships had evaporated. But summer was fast approaching, and his team was also busy developing a virtual summer camp and planning High Holiday services, among other things. Their new idea might have fallen through the cracks, but then he was invited to participate in the Summer 5780 Design Sprint, a program powered by The Jewish Federations of North America.

Over the course of five virtual meetings in a two-week period, Kipnes and 39 other individuals from 35 organizations worked together to turn their ideas into programs — fast. Kipnes’ idea, titled The Kadima Fellowship, will create “real career-path fellowships that will help the synagogue or Jewish community with intense one-on-one mentorships with people in their fields,” he said.

A traditional design sprint brings people together to work on a single project. In this case, each organization worked on developing its own unique idea while giving the others support and feedback along the way. As a group, though, they had an ambitious, high-level overall metric: to engage 500,000 people in a meaningful Jewish experience this summer.

“Moving from idea to program is hard,” said Beth Cousens, Associate Vice President for Jewish Education and Engagement at JFNA, who organized and ran the Design Sprint. “And in normal times we can take a few months to do that. But this pandemic is a whole different thing. This year, we wanted to come out of the gate at the beginning of summer with resources people will need to anchor them in this complicated time. How could we speed up that process?

​Cousens and her team recruited creative thinkers from Jewish organizations around the country — national and local, large and small — to participate. They gathered on Zoom to discuss design questions, consider long-term outcomes, and brainstorm. They pitched their ideas to each other in small groups. “What really mattered was repeating the idea over and over to people they don’t work with, to sharpen it and get feedback,” Cousens said. “The process helped strengthen each idea.”

“How audacious to ask for hours of our time when we’re all so busy right now,” said Alan Scher, Associate Executive Director of the 14th Street Y in Manhattan. “But it was an opportunity to be part of something great. All of us rose to the moment, and it was a fascinating experience.”

Scher said he didn’t come in with a specific idea, but the process helped him come up with one. “I was able to road test it with the people I was suddenly involved with, and connect with them behind the scenes. Consequently, at the end, not only was I excited, but the people in the room were excited, and when I shared it with my colleagues in the New York JCC community, they were excited about it too. I truly birthed an idea, field tested it and brought it close to fruition.”

That idea, the Great Scavenger Hunt, is a different kind of virtual camp program. “It’s more family-centric, as opposed to a crutch for families, from a child-care perspective. Your summer could be a scavenger hunt of incredible experiences, with educators who will prompt you to have all sorts of adventures with your family, some onscreen, some not.” He expects to bring this idea to life, at least in part, this summer in collaboration with other local JCCs.

When Jaimie Krass signed up for the Design Sprint, she had just started a new job as national director of youth programs at Keshet, which works toward the full equality of all LGBTQ Jews and their families in Jewish life. The Keshet youth programs team had begun thinking about what summer could look like if camps were cancelled, and she pitched her fledgling idea for a leadership development series. “It’s an opportunity for Jewish organizations to nominate one or two LGBTQ Jewish youth to a leadership cohort that Keshet will steward, she said. "They will go back to their organizations and spearhead LGBTQ engagement work.”

Jaimie added, “Only in discussions at the Design Sprint did the idea germinate and blossom. Collaboration was how it went from vision to possibility.”

At the end of the Design Sprint, all the participants voted for four initiatives that will receive funding from JFNA. This seed money will help get those ideas off the ground, but the Design Sprint process itself gave all of the initiatives a boost that will enable many of them to become actionable over the summer. 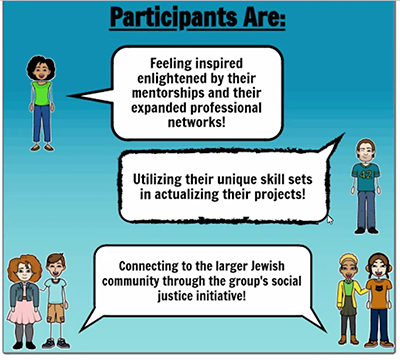 And the benefits of the Design Sprint extend far beyond the program ideas that the participants explored together.

All the participants forged new relationships with colleagues in the field. “It was a great opportunity to meet a lot of folks,” Scher said. “The silver lining of the pandemic is the ease with which we’re suddenly connected with people beyond our geographic bounds. I have a call on my calendar tomorrow with someone from the sprint about collaboration.”

“In breakouts, along with brainstorming different approaches, we connected and vented about how life has changed in the Jewish nonprofit world. It was very affirming of our experiences, in grappling with what summer would look like. That was a deeply fulfilling piece of this project,” Krass said.

“Although I knew instinctively that everyone else is going through this, it was only when I was in that room that I realized the whole Jewish world is working on the same goal, to create meaningful Jewish experiences in a COVID-19 world,” Kipnes said. “My ideas suddenly became a critical element in the stabilizing of the Jewish community. I thought I was doing it for my own people; I realized it’s for the whole Jewish community.”

See a full list of the initiatives developed in the Design Sprint. Each initiative is looking for seed funding! Contact Beth.Cousens@JewishFederations.org for more information.