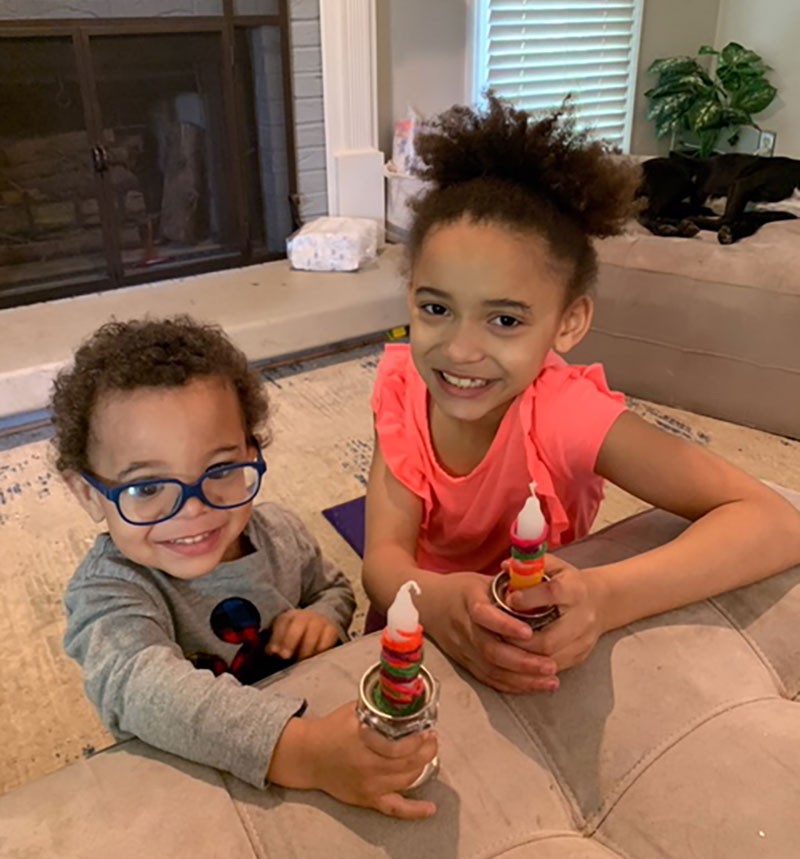 Above: In Atlanta, Ashley Chenault’s kids escape the boredom of quarantine by participating in a virtual Jewish scavenger hunt, sponsored by the Jewish Federation of Greater Atlanta’s PJ Library program.

After weeks at home, like kids across the country, Ashley Chenault’s three children missed the friends they usually see at PJ Library activities. So Ashley was thrilled when she and her kids got to participate along with their friends in a fun virtual scavenger hunt, run by the Jewish Federation of Greater Atlanta’s PJ Library program.

Parents and kids tuned in as Abbey Adler, who creates programming for Atlanta’s PJ Library families, led them through an engaging Jewish journey. She sent children to search their homes for items that represented each holiday and then virtually share them with other families. As they searched, parents and kids shared stories and memories.

“It provided a bit of normalcy for the kids to do an activity together,” said Ashley. It was a relief for her to see her 8-year-old daughter Khalia interacting with her friends. This innovative program created togetherness among 14 isolated families.

All over the U.S., quarantined parents are looking for new ways to engage their children in Jewish activities and connect with other Jewish families. Federations, JCCs, preschools, synagogues and camps are meeting this need with a wide range of creative programs.

“It’s uncharted territory for everyone, so we are learning as we go,” said Hallie Freed, community program director at the Jewish Federation of Greater Toledo. “These families look to us as their source for Jewish life.”

Freed found that a simple activity can have a big impact when she organized a virtual pizza party right after Passover for 15 families in this small Jewish community. She had pizza delivered to their doorsteps, then gathered everyone on a Zoom call to watch a BimBam video about being grateful and talk about what they were grateful for.” It’s the simplest thing I’ve ever done,” she said, “and I’ve never gotten so many thank yous.”

Not every activity needs to be online, though, she emphasized. “Everyone’s on computers all day, so we’re trying to give them something where they don’t have to be plugged in.”

Instead of the big event she had planned for Israel’s Independence Day, Freed packed up the art supplies she had already ordered, along with Israeli snacks, and invited local families to pick the kits up from her porch. She is currently in the midst of a tzedakah box decorating project, in which 20 families signed up to participate. Freed dropped off the boxes and art supplies at their homes, and asked the participants to take a picture and post it on the Federation page. “We’re listening to what people are asking for, and giving them something they can do at their leisure, something fun that’s family oriented.”

In Phoenix, too, quarantined children are busy decorating tzedakah boxes. The Jewish Free Loan Society donated basic tzedakah boxes, and Shoshana Greenberg, director of the Jewish Federation of Greater Phoenix’s NowGen program, had planned an ambitious two-part live event. After coming together to collect their boxes and art supplies, kids would have five months to decorate them and fill them with coins. In September, they would reconvene at a large-scale event where they’d allocate their tzedakah funds. When Greenberg began publicizing the on-line version of the launch event, she started hearing from families in different cities who wanted to be involved. So she shipped the boxes and art supplies to everyone who requested them, and she’s currently reimagining the September event so that everyone can take part. She originally hoped to engage 75-100 people, and ended up shipping packages to 150.

Parents in Los Angeles can visit the local PJ Library Facebook page twice a day to find fun, meaningful videos to engage and distract their children. There are simple art projects, science experiments, songs, and stories, all with a Jewish twist. Risa Goldstein, director of PJ Library for the Jewish Federation of Greater Los Angeles, works hard to provide meaningful content to isolated Jewish families with young children. “People can come to it when they want to; there’s no pressure to participate live.”

Goldstein’s team includes four community connectors who focus on families with kids aged 0-2 in specific neighborhoods. These parents, Goldstein says, are really eager for opportunities to interact with each other, and the PJ Library connectors provide it, convening them on Zoom for coffee chats, trivia nights, and other social encounters where they can relax together.

As summer approaches, Jewish camps are beginning to announce their decisions about whether they will open. Meanwhile, some camps are reaching out to campers and their families right now, strengthening the camp community and making newcomers feel welcome during a challenging time.

Tamarack Camps, an overnight camp affiliated with the Jewish Federation of Metropolitan Detroit, has offered online versions of activities campers love, from arts and crafts to sports and baking. But it’s the weekly community havdallah service that has most successfully bridged the distances between campers and relieved some of the isolation they are feeling. At Jewish summer camps, the ceremony that concludes Shabbat is a beloved ritual. The spirituality of the havdallah service, with its familiar blessings and songs, provides comfort and connection.

“For our family, virtual havdallah brings a sense of normalcy. Our kids get to see their friends and it feels like they’re actually at camp,” said Hallie Steckler, a parent of Tamarack campers.

“In this unpredictable time, it’s something predictable that my kids can look forward to and that everyone, regardless of age, can participate in.”