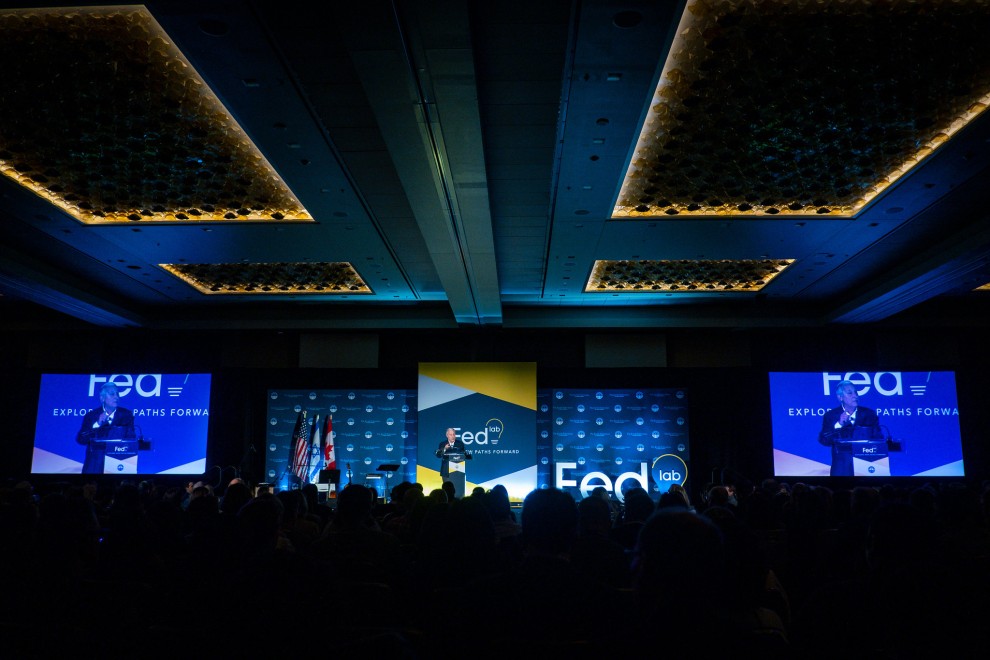 David Brown and Wendy Abrams can tell you that FedLab, a deep dive laboratory, wasn’t an ordinary conference.

Nor was it designed to be.

Last winter, the leadership of the Jewish Federations of North America (JFNA) asked themselves, “What would happen if, instead of our annual General Assembly, this year we tried something altogether different? What if we bring together our top movers and shakers for intensive hands-on workshops, to wrestle with the most pressing issues facing the Jewish world today?”

The result was FedLab, where for nearly three days in November 900 of the most influential professionals and lay leaders from Jewish Federations across North America gathered in Washington, D.C. to explore and brainstorm solutions to some of the Jewish people’s greatest challenges.

It was a format that, for this year, was destined to replace the traditional General Assembly which typically attracts some 3,000 people and has been a mainstay of the Jewish community for the last 86 years.

“It was a bold experiment and one that succeeded far beyond our expectations,” says JFNA President & CEO Eric Fingerhut. “FedLab was a powerful think tank where we had the undivided attention of 900 leaders who were all committed to taking a deep dive and hard look at some of the most crucial and complex issues facing our Jewish communities today.”

The goal: Laying the groundwork for local and collective action going forward.

To keep the emphasis on the brainstorming workshops, there were only a handful of speeches and presentations at FedLab. These included Sarah Hurwitz, author of Here All Along: Finding Meaning, Spirituality, and a Deeper Connection to Life – in Judaism, as interviewed by Erica Brown, Director of the Mayberg Center for Jewish Education and Leadership at George Washington University, and Lior Zoref, author of Mindsharing – the Art of Crowdsourcing Everything, presenting on strategic uses of crowdsourcing for the Jewish community.

It was a natural choice for Brown to spend his time in discussions of Jewish engagement, a topic he’s been deeply involved in not only as National JFNA Campaign Chair, but also as longtime Board member of BBYO. “I’ve been focused on ‘next gen’ engagement for decades,” he says. “The idea is ensuring that they walk into a strong Jewish community, though it may be different from the ways my wife and I or our parents would have defined it.”

At FedLab, that focus on change was at the heart of everything the #EngageJewish track participants did, says Brown. “It was great to see it being discussed and learn what other communities and other organizations are doing,” he says. He was also reminded of an important point: “High school youth engagement is key to engaging next gens.,” he adds. “We often skip over it and go right to Hillel and Birthright Israel.”

We need to remember that the teen years are the most formidable ones, says Brown. “With the less-than-stellar reputation of supplemental Jewish education, many of the kids would run away if it weren’t for Jewish youth groups, Jewish sleepaway camps and Israel summer programs. These things work. The kids develop strong Jewish identities and learn to be advocates. And what do we really want for our kids going forward? To develop a love for our people, a deep connection to Israel with all of its beauty and all of its warts, and a love and understanding of Jewish learning.”

The Action for Good track was equally apropos for Wendy Abrams whose commitment to social services and community relations has led not only to her membership on the JFNA Board, its Health and Human Services Commission and Overall Planning and Allocations Committee but also to long-term involvement with Chicago-area Jewish health and human services, as well as a recent trip to Israel with a group of Chicago’s Latinx leaders

“Our track’s conversations reminded us that we have to look at people who are living in poverty with higher level of dignity and empathy then perhaps most people realize,” she says.

Besides a strong focus on exploring how to increase synergy, streamlining and cooperation between a community’s agencies, they also were reminded that the commitment to help those in need appeals to young adults, she adds. “We know that the next gen is volunteering in higher numbers then past generations and many of those contributions are made locally—where they can see the results of their contributions,” says Abrams. One of the groundbreaking programs they heard about is a “virtual food pantry” inviting those in need to order what they need ahead of time. “Then the pickup is less conspicuous, less embarrassing,” she says.

All in all, FedLab accomplished its ambitious goals, Abrams says. ‘I loved the format; we were tasked with rolling up our sleeves and coming up with new ideas; even the round tables promoted interaction and thinking outside the box.”

Many of these goals crystallized in FedLab’s workshops, Brown adds. “The model of trying something different was a big risk, but people came away feeling empowered, with new ideas to be shared at home. When you walk in you think you’ve heard it all before but pretty quickly you realize you haven’t; there is so much more to learn.”

Next year, the Jewish Federations of North America is planning to return to its time-honored General Assembly format, this time in Chicago, with some 3,000 participants expected to be on hand.

“We plan to bring into the next GA much of the impact of FedLab, which was a laboratory for creative solutions that our communities can truly use going forward,” says JFNA’s Fingerhut. “That way we’ll be able to engage even more people working together to create a Jewish future that’s stronger, more secure and more vibrant than ever before.”