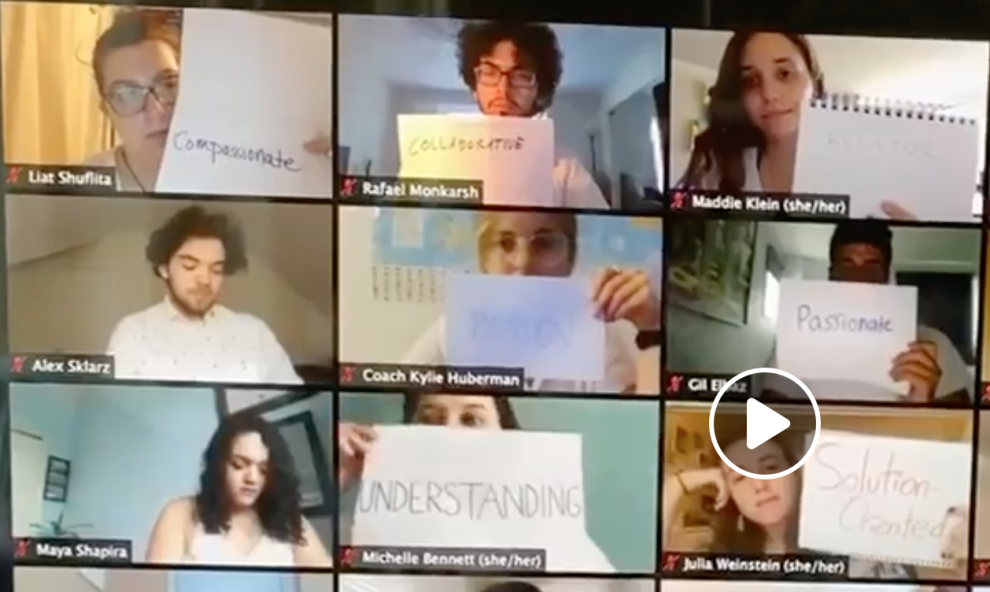 Above: A screenshot from a Jewish Changemakers Shabbat celebration

Sophie Cardin, a college student from Denver, was hoping to get an internship at a civil rights law firm. Max Winer, a recent college graduate from Fresno, had planned to work at an overnight camp as a recording studio engineer and song leader. Ariana Roman, who’s about to start a Master’s program in Chicago, was registered for a Birthright Israel trip.

None of those plans materialized. Instead, they participated in a transformative program that challenged their assumptions and empowered them to advocate for social change.

As the summer plans of young Jewish leaders all over the world evaporated, the National Young Leadership team at The Jewish Federations of North America strategized about how to turn this calamity into an opportunity. “We recognized that a lot of young people wanted structure, wanted to connect with each other, and wanted to lean in to some of the problems and challenges of the day,” said David Kessel, Associate Vice President of Young Leadership and Next Gen Engagement at JFNA. “We knew young people wanted to make a difference.”

A leadership development program with the scope Kessel and his team envisioned could take a year to come together in normal times — but these aren’t normal times. The planning began in May with focus groups of young adults, recruited through local Federations and partners like Birthright and Moishe House. “As we built out the structure and vision, we continually vetted them in real time with these young adults,” Kessel said. “Then we engaged a team of four interns, college students themselves, to help guide it. That’s why we had 2,300 applicants right out of the box.”

“We opened up recruitment and were swamped with interest,” said Jacob Solomon, President and CEO of the Jewish Federation of Greater Miami.

About 1,000 young leaders, ages 20-25, were accepted into the first two Jewish Changemakers cohorts. The first session ran from July 6-24; the second began on August 3 and culminates on August 21. A third is slated to launch later this year.

Through a framework of Jewish values, the Changemakers curriculum focuses on three broad areas: personal and professional development, global Jewish communities, and service and advocacy. The content was designed to be provocative, compelling the fellows to confront topics of importance and urgency. Sessions ranged from Jewish inclusion, diversity and peoplehood to LGBTQ issues, anti-Semitism and gun violence.

Max Winer’s favorite speakers included Eric Ward, Executive Director of the Western States Center, who discussed being a Black community leader committed to fighting anti-Semitism, which he regards as a driver of other forms of hate. Winer also singled out community organizer Gregory Jackson’s session on gun violence, as well as Jewish learning with Rabbi Menachem Creditor, rabbi-in-residence at UJA-Federation of New York. “Those sessions were worth the price of admission,” he said, referring to the big investment of time and energy the fellows were expected to make. “They were powerful moments that inspired me.”

More than 30 Jewish community partner agencies collaborated with JFNA to create content and present it. “Virtually no one we asked to teach or present said no — in fact, many approached us proactively,” said Rachel Shtern, who directs Changemakers. “They all felt as passionately as we did and wanted to help make it successful.” The virtual nature of the program became an advantage, enabling an exceptional slate of people from around the world to be involved in every aspect.

Nearly 150 faculty members and presenters participated in the program, plus 50 coaches and 100 mentors. The coaches, many of whom work in Federation Young Leadership departments, met with small groups of fellows, often from their own communities, to provide guidance as they navigated the program. The mentors, most of them members of the Federation system’s National Young Leadership Cabinet, are professionals from a wide variety of fields who met informally with small groups of fellows interested in their fields. “We talked to them them about our experiences, how we got where we are,” said Kira Finkenberg, one of the mentors, who lives in San Diego and does concert event planning and marketing. “I’ve already introduced a few of them to some of my contacts.”

The Jewish Changemakers fellows start each morning with a podcast that sets the tone for the day and assigns a daily challenge. An interactive core session, held live every weekday, is attended by the entire group. In the afternoon, the fellows choose among elective sessions. The program is rich, substantial, multi-dimensional and immersive, using a wide variety of tools to take full advantage of the online experience.

Sophie Cardin, the college student from Denver, appreciated learning about the different interactive tools the program introduced her to. “It was so useful for me to see how these tools can be used to make meaningful connections on line,” she said. “I’ve already used collaborative work spaces and polls for an organizing collective I’m part of, and in working with Colorado’s state government to get student voter access.” 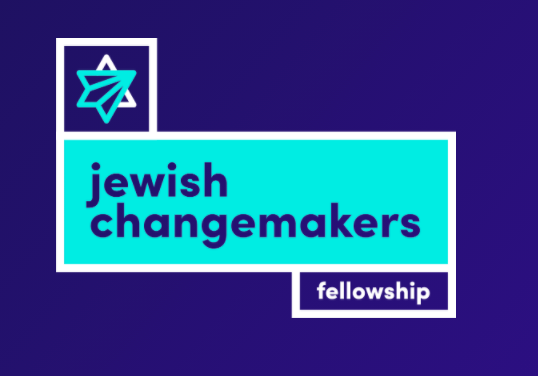 A Place to Connect, Dialogue and Debate, Respectfully

The goal of these tools was to give the fellows lots of opportunities to interact with the presenters and with each other, which many of them found to be one of the most rewarding aspects of the program. “The fellows I’ve spoken to were blown away by the ability of sessions to dive deeply into challenging conversations in a civil way,” said Debra Barton Grant, CEO and Executive Vice President of the Jewish Federation of Greater Indianapolis. “They are loving the ability to connect with people different from themselves. They’re having deep, meaningful conversations with people they never would have talked with.”

“The discussions we had in groups really challenged the status quo,” said Saul Malek, a 22-year-old fellow from Houston. "We looked deeply at what it means to be Jewish.” As an example, he cited a challenging discussion about Israel and Palestine. “What really impressed me was that my fellow changemakers didn’t blindly accept everything we know already about the Israeli government. They were willing to take a deeper look and understand a different perspective.”

“There was space for people to express their opinions, with a perfect balance of honesty and respect,” said Max Moline, Director of NextGen at the Jewish Federation of Greater Philadelphia, who served as one of the coaches.

Connecting with each other and with the presenters was another big benefit to the fellows. “I did not expect half the connections I made professionally and personally,” Ariana Roman said. “I gained insight as a whole into people who are different, and I loved meeting Jews from Portugal, Spain, and other countries.”

Roman, who is studying for a Master’s in Public Health, also learned things about the Jewish community that may change the course of her career.  “I found out about organizations like Jewish Women International and Mazon, so now I know that I could go beyond just working in public health field, and work with a population that I’m connected to.” She has already connected with Gamal Palmer, a professional at the Jewish Federation of Greater Los Angeles, who kicked off the program for both cohorts.

For Lucas Mizrahy, a Brazilian medical student, the connections he made to other Jews felt especially meaningful. The fellowship accelerated his personal Jewish journey. Raised Christian, he only found out a year and half ago that he has Jewish roots, and since then he has worked hard to learn about this important part of himself. He’s already been to Israel twice. “The Changemakers group was so diverse,” he said, “and I felt so welcome. I’m part of something so big, and now I know that no matter where I am, people will be there for me. I felt this with everyone I connected with in the program.”

Jewish Changemakers gave Federations a unique opportunity to hear what this generation is thinking. “They have a lot to say — their future is literally at stake,” said Kessel. “The Jewish community is an essential partner and springboard to harness the talents of these young adults for the greater good.”

“This is the next generation of leadership that we’re building, and we have to understand where they are, or at least listen,” said Josh Broide, Director of Jewish Engagement at the Jewish Federaton of South Palm Beach County, one of the coaches. “We invited them to take a look at our world, and there’s massive interest. The coaches who worked with fellows from their own communities got to make it very local. I could ask them, Is this a challenge we have in our community? Is this something our Federation should focus on? I don’t often get to sit around with a group like this and ask, what do you think about a particular issue? It was eye-opening to me.”

“Federation exists to build community and then connect that community to the biggest events shaping the Jewish world,” said Jacob Solomon of Miami. “Jewish Changemakers checks all those boxes. It connects them with national resources and the global reach of the Federation system. It’s a great entry point for young adults who need touchpoints with community right now, like the rest of us.”

“This has been transformational program for our community,” said Barton Grant of Indianapolis. “We had close to 20 young adults, includes several children of our major donors, who independently reached out to me thanking me for encouraging them to apply. These were our first PJ Library children — they’ve participated in BBYO, Hillel, sumer camps, and now, while they’re stuck at home, we’re showing them the relevancy of Federation in their lives and helping them reconnect with each other. Our next step is to mentor them when they are ready to get involved.”