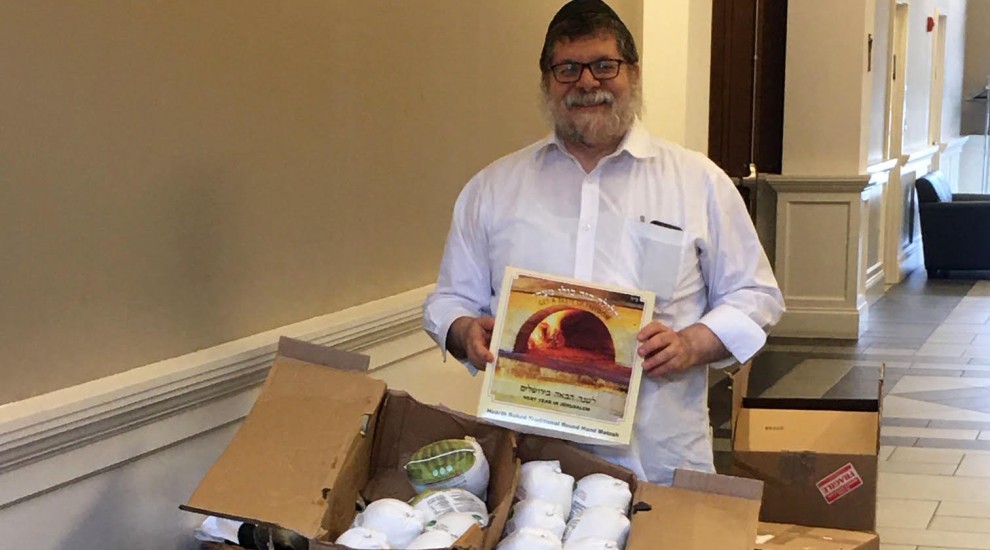 Above: Rabbi Areyah Kaltmann packs boxes of frozen kosher chickens to be distributed to families for Passover. (Courtesy of JewishColumbus)

In the shadow of the coronavirus pandemic, this year’s Passover will be like no other in living memory.

With families kept apart by lockdown orders and millions struggling with uncertain financial futures, the needs are great and the logistics of coordinating Passover aid are daunting.

Across America, Jewish Federations are finding unconventional ways to cope with the restrictions while helping with Passover needs. Among them: kosher chickens in Columbus, Ohio, free matzah in Memphis, supermarket gift cards in Chicago, catered Seder plates in Houston and online Seders from coast to coast.

“We are working vigorously with our partners at the Jewish Community Foundation and Jewish Family Services to ensure that homebound individuals have access to groceries — including Passover meals — as people increasingly heed our governor’s admonitions to stay home,” said David Waren, president and CEO of the Jewish Federation of Greater Hartford.

Waren’s Federation, which serves around 30,000 Jews in central Connecticut, managed to procure from a Brooklyn caterer 1,000 frozen kosher-for-Passover airline meals that had been prepared for El Al passengers. With the COVID-19 pandemic having grounded nearly all El Al flights, volunteers are now busy handing out those meals to Jews who need them — including Holocaust survivors — in the Hartford area.

“Our staff have been working around the clock for the last two weeks to develop a whole new distribution network,” Waren said. “None of us were in the business of supplying food, but people who were otherwise educators have pivoted to build a mechanism that involves everything from food procurement and handling to storage and delivery. Every step of the way is a new challenge.”

“We knew very early on that coronavirus was going to cause a major disruption to our community,” said Joel Marcovitch, CEO of JewishColumbus. “We predicted there would be major job losses, and that there would be stockpiling and a shortage of items kosher for Passover, especially meat and chicken.”

Besides the 1,000 kosher chickens, JewishColumbus prepared and delivered 4,000 meals from a JCC kitchen. In addition, schoolchildren are drawing pictures and emailing them to 100 or so elderly Jews living at Wexner Heritage Village, a nursing home. The community scheduled an online seder for the Monday before Passover.

“People are very nervous. The virus is still out there, and people aren’t leaving their homes,” Marcovitch said. “But from what I’ve heard, they are incredibly grateful for clergy providing spiritual support and creative programming online.” 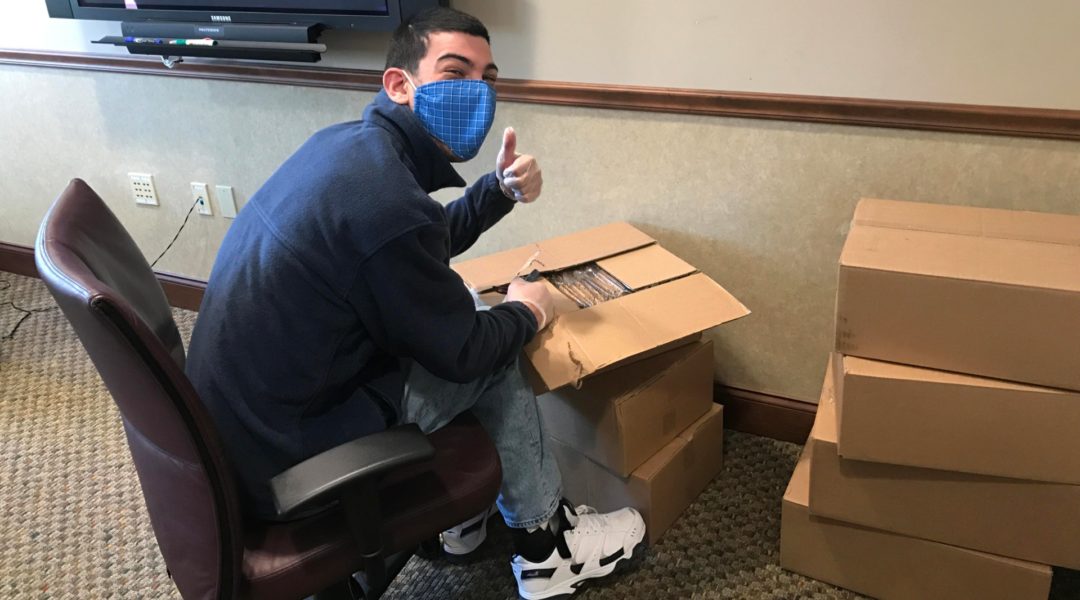 Marcus Apter, a volunteer at the Hartford JCC, packs boxes of Passover matzah for needy Jewish families in central Connecticut.
(Courtesy of the Jewish Federation of Greater Hartford)

In Florida, where Gov. Ron DeSantis ordered a statewide lockdown only on April 1, many residents are in dire straits. Roughly one-fifth of the 133,000 Jews in the southern half of Palm Beach County live at or below the poverty level, according to Matthew C. Levin, president and CEO of the Jewish Federation of South Palm Beach County.

“The calls coming in over the last week are more desperate — calls from people who’ve lost their jobs and can’t pay rent, or seniors trapped in their home because they’re scared, can’t get to Publix and can’t afford grocery delivery services,” Levin said. “We have lots of single moms as well as indigent seniors outliving their retirement savings, and they’re all dependent on a social safety net.”

After a Passover program at a New Jersey hotel was shut down due to the pandemic, leaving many truckloads of frozen and partially cooked kosher-for-Passover meals and dry goods stranded, Levin’s Federation was able to organize community partners and together obtain the food at cost. It was distributed to South Palm Beach County neighbors in need.

In Chicago, the nonprofit group Maot Chitim, a partner of Jewish United Fund, usually enlists an army of 1,500 volunteers right before Passover to pack and deliver food boxes to thousands of Jews in need.

But this year, with social distancing requirements making it impossible for hundreds of people to safely gather in a warehouse to pack food items — let alone deliver the food — Maot Chitim shifted gears. Working with Jewel-Osco, one of the Chicago area’s largest grocery chains, Maot Chitim purchased more than 4,000 gift cards. Volunteers mailed them to recipients with letters written in English and Russian explaining how to use the cards.

Jewish families went to the Maot Chitim warehouse to pick up full cases of matzah, chicken and other items; local Jewish day school students loaded the groceries into their cars.

As word spread, calls for help started pouring in — 60 to 70 a day, according to Maot Chitim’s executive director, Joellyn Stoliar. Maot Chitim is already on its third order of gift cards, with more on the way.

Elyse Freed, communications manager at the Jewish Federation of Greater Houston, said many of the 56,000 members of her community will be celebrating Passover via Zoom.

“This was a very hard pill to swallow, but it’s the new reality,” Freed said. “I think slowly people are just sort of accepting it, as with the five stages of grief. We’re now in the acceptance stage. We know this Passover’s going to be different.”