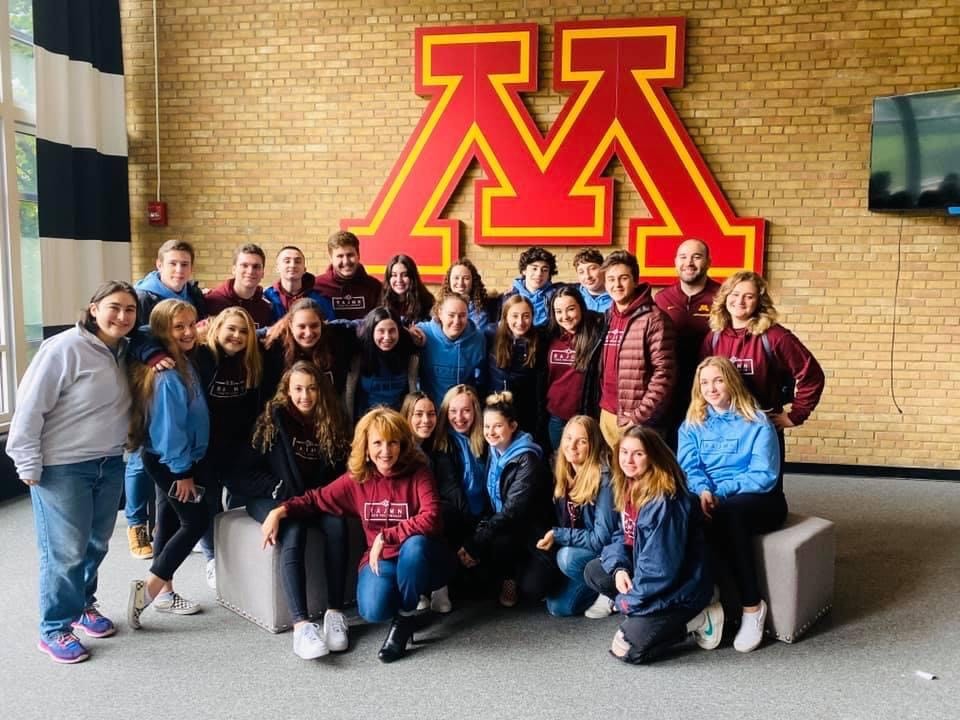 Above: A group of participants at a RAJMN program.

Ilana Voladarsky, founder and executive director of Russian American Jews in Minnesota (RAJMN), was lucky, she said. She grew up in Lviv, Ukraine, in a family that felt proud to be Jewish and didn’t hide their identity. “My grandmother raised me to embrace being Jewish,” she said. “My name came from Israel — I got my name from my aunt who moved to Israel a year before I was born.”

She immigrated to the U.S. at age 15 in 1989 with her parents and younger brother, settling in St. Paul, Minnesota. At 16, she heard about the Alexander Muss High School in Israel, and she wanted to go, but she couldn’t afford it. “That’s when I was connected to donors at the Jewish Federation of Greater St. Paul to request a scholarship. That’s when I met my mentors, the family that ‘adopted’ me in St. Paul, Rhoda and Donald Mains.”

Ilana’s friendship with the Mainses, which continues to this day, connected her to the St. Paul Jewish community. They invited her to events and to their friends’ homes, helping her integrate. Ilana went to college and took a corporate job, “and then the Young Leadership director from the St. Paul Federation invited me to lunch.  She asked me to be on board of directors for Young Leadership. I asked some questions about what they do and how they operate, and then out of nowhere I asked, ‘do you have anything like that for Russian-speaking Jews? She asked if there was a need, and I said absolutely.”  Ilana brought the idea to the Federation’s executive director and got a grant from the St Paul Federation for a pilot project.

Eighteen years later, RAJMN is a robust program that serves 3,000 Russian-speaking Jews of all ages in the Twin Cities. They work in partnership with many Jewish organizations in both Minneapolis and St. Paul, serving as a bridge for Russian-speaking Jews to synagogues, camps, JCCs, Hillels and more.

Ilana was 27 when she launched her pilot program for Russian-speaking young adults 18-35. “I gathered people of my age to build community together. They didn’t know each other, and they didn’t have the Mainses to bring them in. I wanted to be like Rhoda and Donald Mains for other people.” She called people she had met when she immigrated, and she also used the phone book to find people with Russian names.

“My idea was to celebrate Jewish holidays together, preserve our heritage and connect them with Jewish community. I still have the piece of paper we wrote our ideas on at our first brainstorming session. They were resistant to discussing Jewish education and synagogues because most of them are secular Jews, and I was disappointed because people didn’t want to do the things I had envisioned. I had to find strategic way to get them involved.”

The first event was a Purim ballroom dance competition and dinner, attended by 150 people.  It took place at a synagogue, and Ilana noticed that people who had been at that brainstorming session were looking at the Judaica objects in the synagogue’s gift shop with interest and curiosity. “I thought, they don’t really know what they want. They didn’t grow up with it, so they don’t understand about passing their love for Judaism to their children. Now those people are bringing their children to my programs.”

As the program continued, and grew, the young adult participants aged out but continued to come to events. They formed families, and Ilana built RAJMN based on their evolving needs. Every year, she expands the program and adds new things. “Genesis Philanthropy Group has been very generous for past eight years,” she said. “They give me a way to bring more people under our wings. Now we cover the needs of the whole community.”

RAJMN’s mission today is to deepen the connection of Minnesota’s Russian-speaking Jews to each other, to their Judaism, and to the larger Minnesota Jewish community. From young families to Holocaust survivors, virtually everyone can find a Jewish connection at RAJMN.

One of RAJMN’s signature programs is the Teen Fellowship, a selective program for high school students that helps participants acquire leadership skills while they expand their understanding of themselves, their Jewish identities, and their Russian culture. Ilana shaped the program in partnership with her son Lawrence, one of the original participants, and it launched in 2015. Lawrence and some of the other alumni, now college students, serve as TAs, mentoring small groups of current participants.

“We launched it as a pilot, with 12 kids, and now it’s grown to 36,” said Lawrence, who is studying finance law at the University of Minnesota. “Our goal is to build a community that’s like family. We come from similar backgrounds — our parents immigrated from the USSR, and we’re the first generation immersed in American culture.” As the program has grown, he said, it has evolved to meet the needs of the participants.”

“This year, our big focus is on the immigration stories of our parents. They’re learning about their parents’ stories — not everyone knows. It was a difficult journey for many people. We’re putting together a book so they can all share that information. We’ll never experience what they experienced; we live completely different lives here. It helps us appreciate what we have even more.”

One of Lawrence’s fellow TAs is Anthony Shiskin, a student at the University of St. Thomas in St. Paul. His parents came from Ukraine when they were teenagers and went to college in Minnesota. When Anthony’s brother was young, they decided to send him to Hebrew school, and they began to feel connected with the Jewish community.

About the Teen Fellowship, he said enthusiastically, “It’s awesome! I’ve been going for five years. I’ve been learning about the Soviet era and about how hard it was to be both Russian and Jewish.” Through Teen Fellowship, he has done community service across the Twin Cities, raised money by selling hamentashen, and created events for the Russian-speaking Jewish community. “It’s fun to have a group of friends who are similar to me — it’s a different kind of friendship, it feels like a family.”

For 18 years, Ilana Volodarsky and RAJMN have been building a family in Minnesota. A group of Russian-speaking Jews who were not connected to each other or to Jewish community now have a home, where they can share their common experiences and pass on their love for their traditions, both Russian and Jewish, to their children and grandchildren. “The way I see it,” Ilana said, “we came to the U.S. as Jewish refugees, and we are assets to U.S. We live here and we belong to the community.”