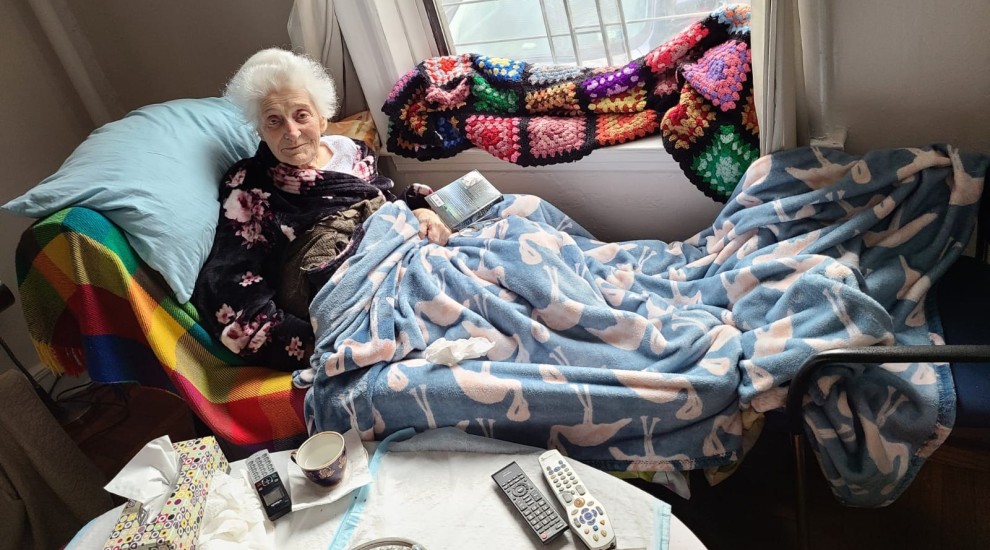 Above: Dina, 89, is one of several homebound Holocaust survivors whose mobility and health has deteriorated during the pandemic. (Courtesy of JCH Bensonhurst)

The struggles of the newly poor come in all shapes and sizes: Jewish families across Maryland and Virginia turning to Jewish social service agencies for help paying electricity and mortgage bills.

Isolated Jewish seniors in Toronto living on fixed incomes who, for the first time in their lives, are facing food insecurity and mental health issues exacerbated by social isolation.

A 57-year-old Jewish Uber driver in Washington, D.C., who stopped driving because of the coronavirus and simply ran out of money.

“He had no income to pay his bills,” said Shuli Tropp, executive director of the Hebrew Free Loan Association of Greater Washington, which gave him a loan.

With America down more than 10 million jobs from only one year ago, COVID-19 is wreaking havoc not just on physical health but on economic well-being and livelihoods. The pandemic that has laid bare the weaknesses of health care systems also has exposed gaping holes in the social safety net that Jewish agencies are straining to fill. In some places in the United States and Canada, government assistance programs are being cut, compounding problems for the newly vulnerable.

In Toronto, Canada’s largest Jewish community, one out of eight Jews was struggling with poverty before the pandemic. After COVID-19 arrived in the city this spring, the number of vulnerable community members surged.

“Polling shows that at least 44% of Canadian households have suffered job loss or reduced working hours,” said Adam Minsky, president and CEO of UJA Federation of Greater Toronto, which as the community’s central Jewish charity supports dozens of Jewish agencies and nonprofits in the city. “The Jewish community is no exception. Many previously stable, working and middle-class families are now vulnerable.”

Jewish Federations throughout North America – there are 146 – are reporting similar challenges in their communities.

The desperate situation has prompted a group of Jewish philanthropic foundations and Federations to mount an unprecedented effort to quickly raise tens of millions of dollars to send to frontline Jewish service agencies across the continent trying to meet these new needs.

The framework is a new $54 million Human Services Relief Fund in which any money raised by Federations by Dec. 31, up to $36 million total, will be supplemented by another 50% in funding contributed by seven Jewish philanthropic foundations. One of those major foundations, the Maimonides Fund, launched the drive when it realized that Jewish federations were dipping into their financial reserves to continue to fund projects to help clients during the COVID-19 pandemic.

“As the pandemic dragged on, our board grew increasingly concerned about the impact on the most vulnerable members of the Jewish community,” said Mark Charendoff, Maimonides Fund’s president. “We wanted to create an opportunity that would help local communities meet those needs.” 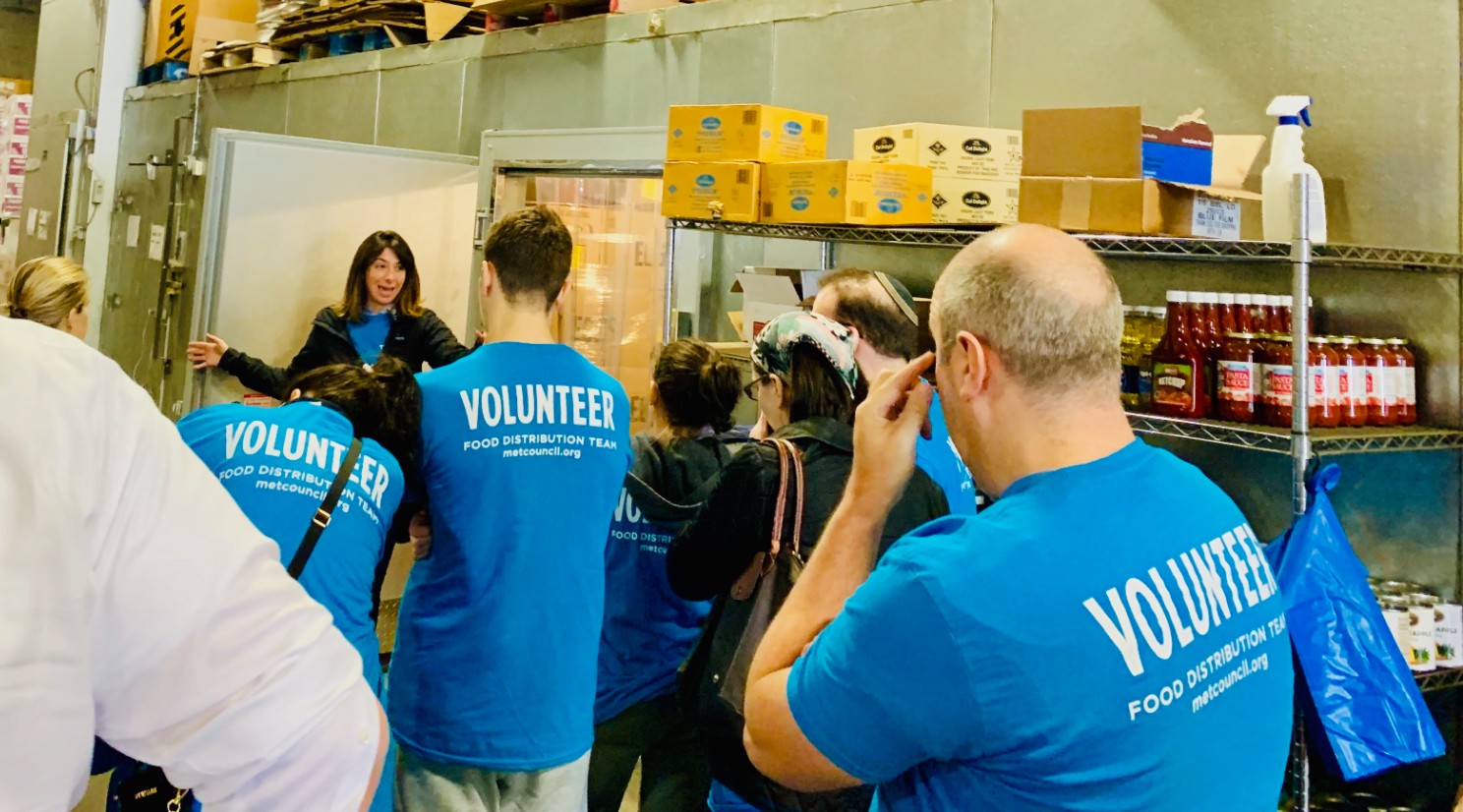 Above: Volunteers gather at a food distribution center in New York run by the Met Council on Jewish Poverty. (Courtesy of Met Council)

The money is making a difference on the ground.

In Washington, D.C., the local Federation sent an additional $150,000 to the local Hebrew Free Loan Association, enabling the distribution of about 60 new loans and an increase in the maximum loan amount to $2,500 from $1,500.

In Richmond, Virginia, the matching fund helped the Jewish Community Federation raise nearly $400,000 from its Jewish population of about 12,000.

The extra money is going to area preschool programs, help for the newly needy to pay their bills and tablet computers for seniors stuck at home so they can connect with others by video chat. Among the facilities receiving tablets is Richmond’s Beth Shalom Life Care Community.

“The iPads are lifesavers,” said Helen Griffin, whose mother, Beatrice Fine, 93, is a resident of its assisted-living facility. “It’s all about the human connection.”

The importance of keeping seniors socially engaged cannot be overstated, say experts, noting that staying inside and being socially isolated can cause significant mental and physical decline, particularly in adults over 70.

In Cincinnati, Ohio, the Jewish Family Service agency is using money it received from the Jewish Federation there to provide Jewish seniors with computers, data plans and training to help them learn to get on the internet and use video chats to interact with others.

These dangers of isolation are most pronounced in Holocaust survivors, according to Julia Migounova, director of community and support services at the Bernard Betel Centre in Toronto. The stay-home directives have caused her Russian-speaking clientele to relive memories of hiding during the war, she said.

“Most of them lived in Ukraine and were shipped further east to avoid the war. They were crammed into cattle cars with no food or windows. This isolation reminds them of that and they get so anxious,” Migounova said. “They don’t speak English and so they can’t call for food.”

She described the case of one 83-year-old widow whose only son died of cancer a year ago. Still grieving his death, she lives alone in a small one-bedroom apartment in Toronto and has no one to support her. She can’t go outside because it’s too cold and has no one to talk to except social workers and neighbors she barely knows. She gets three kosher frozen meals a week and a weekly visit from a home health aide.

“We call her every couple of days and sometimes she doesn’t want to talk to anybody,” Migounova said. “This is a very tragic case.”

In New York, an 89-year-old survivor named Dina had been a frequent visitor to the Jewish Community Center of Bensonhurst, Brooklyn, before the pandemic. She used a walker for the two-block trek from her apartment to attend the Yiddish, singing and good-neighbors clubs. A widow, she had a home health aide from 8 a.m. to 4 p.m.

But when the pandemic started, her ability to move deteriorated drastically and she developed back problems. Her home health agency refused to increase the aide’s hours, so Jewish social service agencies stepped in.

“With funds from UJA-Federation of New York, we provided her son with emergency cash assistance so he could hire a home health aide around the clock,” said Alex Budnitsky, CEO of the Jewish Community House of Bensonhurst. “That saved her because she fell down in the middle of the night in May and the aide called an ambulance that brought her to the hospital.”

The New York Federation is raising $2 million as part of the Human Services Relief Fund. That will net the federation another $1 million from the 50% matching program.

“The good news,” said New York Federation Board Chairman David Moore, “is that people who can are stepping up.”

In all, 110 Federations are participating in the fundraising drive. The amount each was asked to raise is proportionate to the size of the local Jewish population.

“The combination of the health and economic crisis caused by COVID-19 will have long-term consequences for our overwhelmed human service network,” said JFNA’s national campaign chairman, David Brown, who is leading the funding effort. “Federations will play a critical role in raising and providing the crucial resources needed to respond to these critical needs.

“We are fortunate to have a generous community of philanthropists that are able to help at this critical time.”