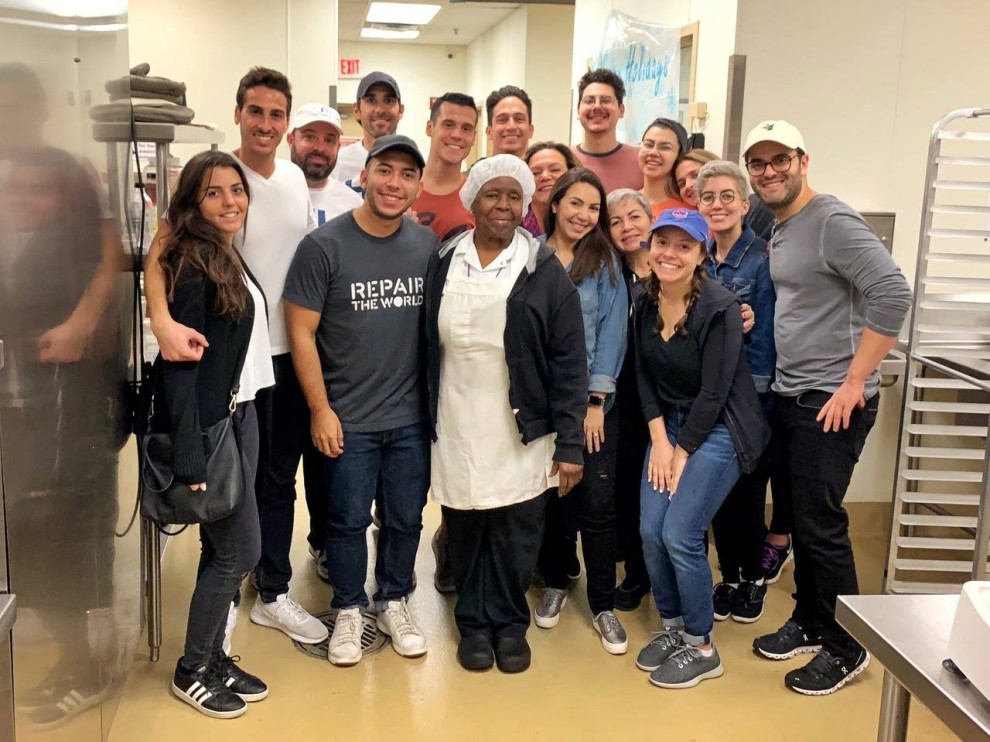 Jonathan Cohen is enjoying the sun and living his best Jewish life in Miami. He works for Repair the World Miami and is always looking for more people to join him while volunteering. Repair the World Miami is grateful to work in close collaboration with the Greater Miami Jewish Federation. Jonathan can be reached at jon.cohen@werepair.org.

“Is it weird we are serving pork chops the day after Yom Kippur?” Daniel asked me while we volunteered at Miami Rescue Mission on Sunday, October 1, 2017. I smiled. Asking questions was not the Judaism I learned growing up, but it is now the Judaism that I live and love every day.

Abstaining from electricity, separating meat and dairy, and frequenting services were a normal part of my childhood weekends. However, during the week I attended a public school surrounded by people with diverse religious backgrounds and ate pepperoni pizza Lunchables. Judaism was an action, a verb, something that my family chose to engage in when it was time to “be Jewish.” I never learned Hebrew and would say prayers and sing songs that I did not understand. I had a set of orthodox Jewish friends who I spent weekends with and a different group of friends at school. To me, it felt normal, good, and real. Some people went to church on Sunday and that was their religion and we went to shul on Saturday and that was ours, I figured this was how religion worked.

When I entered college at Florida State University, I was introduced to both the Hillel and Chabad models of Judaism available to students. My first thought was “Wow! There are so many options here.” At Hillel, I could use my phone during Shabbat services or dinner and still be a “good Jew.” While inside the Hillel building I heard people speak about diversity, LGBTQ+ issues, women’s rights, and many other things that I had been led to believe were meant to be kept separate from religion. Melanie Annis, the professional staff, made the dilapidated building we were in feel safe and welcoming. It was this environment that made me agree to go on a free trip to Israel. While on Birthright I became friends with people who had diverse experiences growing up Jewish. At Florida State Hillel I learned that Judaism is more than a religion of rituals and rules; it has the power to bond us as a community.

Shortly after my Birthright Israel experience, I spent 10 days in the Bahamas on a Hillel alternative break program. Our efforts were spent teaching literacy in children’s homes, cleaning national parks and a Jewish cemetery, and helping at the Bahamian Humane society. It was on this trip that I learned about Repair the World. At the time, Repair the World provided funds to groups to do service in a meaningful way through a Jewish lens. I would later learn this was called “service learning.” Before any of the service projects we did in the Bahamas we would learn about the need our service met, where the need came from in the first place, and how it related to the Jewish value of tikkun olam, Repairing the World. Serving in the Bahamas, I learned that Judaism was more than religion, it was service to others.

With graduation from Florida State approaching it was time to figure out what I would do with the rest of my life. I always had my sights set on grad school but knew that I first wanted to spend some time in “the real world.” I applied and was accepted as a Repair the World Education Jewish Fellow in Brooklyn, New York. I arrived in New York ready to engage a brand new community and learn more about how Judaism related to social justice, volunteering, and community building. My year as a Fellow exceeded my expectations. While a Fellow I engaged in service, community, and engagement through a Jewish lens in ways that I didn't know were possible. It was Purim and we spent time as a cohort making hamantaschen to pass out to our neighbors in Crown Heights, Brooklyn. Crown Heights has three main groups of people who don’t generally engage with one another: the Afro-Caribbean community, Orthodox Jewish long term residents and young new gentrifiers. As Fellows, we looked to be a bridge to others through simple acts like passing out Mishloach Manot, gift bags, making Judaism accessible and welcoming to people who spent their entire lives seeing rituals they did not understand. I realized then that Judaism is more than religion, it is social justice.

I am now in my third year as a staff member at Repair the World in Miami. Many of my friends talk about their feelings of a lack of fulfillment in their careers. I feel fortunate that I have forged a path where my morals, passions, religion, and career are not only in alignment, but elevate one another. In this job, I know that I have become a better person in the way that I move through the world. Through Repair, I have tapped into the best parts of Judaism for me that amplify solidarity, action, and reflection. Being immersed in these ideas every day has impacted me in ways that ripple out to my family, friends, and community. In my role at Repair the World I know that Judaism is more than religion, it is a lifestyle.

At the end of the day, I know being Jewish is like many things in life: you get out of it what you put into it. Being Jewish has been a catalyst and a connector to community, social justice, service to others, and a career I am passionate about. By choosing to put love, community, and goodness into the way I experience and express Judaism, I have gotten all of that back at an incalculable rate of return.