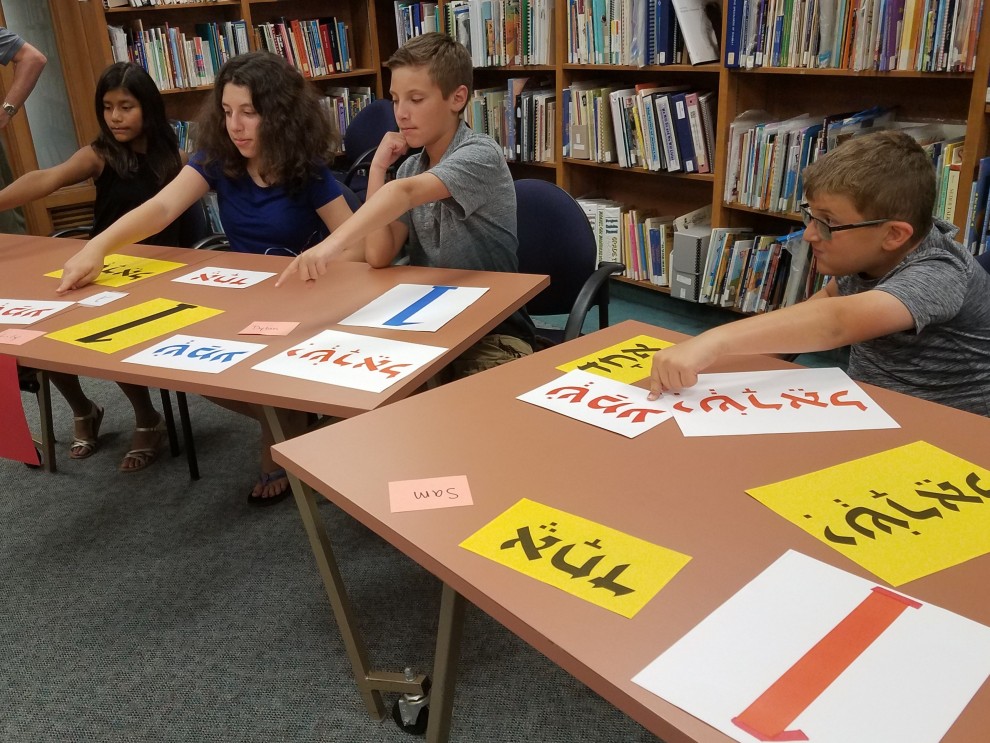 Nachama Skolnik Moskowitz is the Senior Director and Director of Curriculum Resources for the Jewish Education Center of Cleveland. She is also the catalyst behind much of #OnwardHebrew’s work.
“The children are like sponges soaking up every bit of Hebrew they get!
Then they go home and squeeze it out on their siblings, parents and friends.”
Education Director,
2018 #OnwardHebrew Survey Response
There is a change brewing in congregations across North America, one that is dramatically shifting the narrative of children’s experiences with Hebrew learning and Jewish education.  Education directors have begun sharing stories of renewed energy in their buildings and of children who are excited to learn, especially Hebrew.
A child spends five to six years acquiring her first language by hearing, responding to and speaking (i.e., building sounds) before learning to read (tackling print). So, too, a learner in a synagogue setting needs to hear, respond to and speak/sing/recite Hebrew before being taught to read.  Unfortunately, for decades, children across North America have been taught Hebrew backwards – asked to identify letters and pronounce words before having any previous exposure to them nor understanding of their meaning. The resulting boredom, frustration and even tears have given “Hebrew School” its poor reputation.
THE INNOVATION:  HONORING SOUND-TO-PRINT LEARNING
#OnwardHebrew formally burst onto the scene in October 2017, with its roots planted more than 15 years ago. #OnwardHebrew promotes sound-to-print learning and is built on four elements that honor the principles of language acquisition, three of which build the “sounds” and the fourth formally connects to “print.”
THE RESULT: A DRAMATIC SHIFT IN ATTITUDES TOWARD HEBREW AND JEWISH LEARNING
In just a year’s time, 20 synagogues have been designated as “On the Way” (formally adopting three of the four elements listed above) or “All In” (four of the four elements). From these innovators and early adopters, we learn that:
The last two points are illustrated by data attained by Rabbi Stacy Rigler, an education director and member of the #OnwardHebrew leadership team. The chart, below, compares the number of formal Hebrew learning hours between second and sixth grade for her typically-developing students (i.e., those with no special learning challenges) TO their average scores on a 75 question diagnostic Hebrew reading test.

The Hebrew learning hours in Rabbi Rigler’s education program began to drop as she phased in the four #OnwardHebrew elements, including waiting to teach print until later grades. Even with less in-class Hebrew hours in recent years, it is clear that with the sound-to-print learning and increased motivation, children can learn to read Hebrew in much less time. As a bonus, a synagogue educational program that gains an extra 115 hours for Jewish learning (as in the example above) could have students deeply engage in project-based learning, mindfulness practices, off-site service leaning, higher level text study, or any number of foci not possible with a day split between Hebrew and Jewish content.
THE CHALLENGE: ACCELERATING #ONWARDHEBREW’S REACH
#OnwardHebrew is a grassroots initiative that is standing “on the edge of possibility,” beginning to transform a tired, decades old learning model in part-time/congregational educational programs. Its innovative work is supported by the Jewish Education Center of Cleveland and a leadership team of Jewish educators who have shifted the Hebrew learning paradigm in their own synagogues and now serve as existence proofs for what could be. Members of the leadership team volunteer their time in sharing the power of #OnwardHebrew - assisting fellow educators, clergy and volunteer leadership via one-on-one conversations and workshops at national and city-wide conferences. With hundreds of educator-to-educator contacts over the last year, the leadership team expects that the numbers of part-time/congregational programs adopting #OnwardHebrew will dramatically increase.
While three of the four #OnwardHebrew elements are low-hanging fruit (HTM, JLV and t’fillah), the fourth element (waiting to introduce decoding until fifth or sixth grade) is difficult for a number of stakeholders. Many teachers feel loyal to the traditional Hebrew curriculum and teaching model. Some parents and clergy worry whether children will be competent on the day of their bar/bat mitzvah without years of drill and practice. But those who are willing to acknowledge and confront the challenges of learning Hebrew in part-time settings, understand the need for this disruptive, but hugely successful  innovation. The rewards are worth it, because across the continent, children’s eyes are again sparkling when learning Hebrew.
YOU are invited to join the conversation and offer support to #OnwardHebrew’s transformational changes to part-time/congregational education:
Share