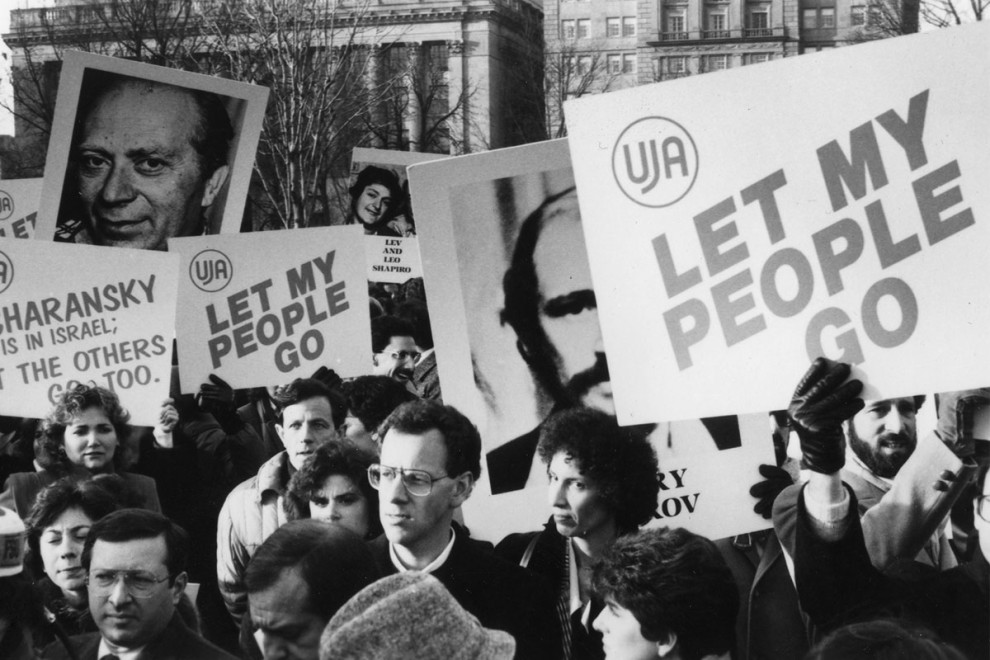 As this long year comes to a close and we look forward to tackling the formidable agenda we have for our community and the world in 2021, it is good to be reminded of our power to make change happen through collective action. December 6 is just such a reminder.

On December 6, 1987, 250,000 people from across the country assembled at the National Mall for the Freedom Sunday for Soviet Jews, crying “Let My People Go” and proudly walking in the footsteps of an equal number who gathered for the 1963 March on Washington and Martin Luther King’s “I Have a Dream” speech.

One of us was there on the mall, having ridden a bus from Cleveland all night with that city’s large delegation organized by the Jewish Federation of Cleveland. The other of us was deep behind the Iron Curtain, very aware of the ramifications of that one line in her birth certificate that said “Jew,” but oblivious to efforts being made on her behalf.

The Freedom Sunday rally coalesced a decades-long struggle for Soviet Jewry that began in 1964 when Elie Wiesel’s The Jews of Silence shined a light on the more than two million Jews throughout the Soviet Union who faced government-led religious persecution, unable to openly live as Jews or to emigrate. In the 1960s, only 4,000 Jews managed to leave. After a group of refuseniks unsuccessfully tried to hijack an empty airliner in 1970, the Soviets cracked down further, imposing unofficial quotas on jobs, taxing émigrés and more.

Slowly, a movement to free Soviet Jewry grew, from grassroots student groups to mainstream established Jewish organizations. By the time Natan Sharansky, who was jailed for a decade in the Gulag under trumped-up espionage charges, was freed in a prisoner exchange in early 1986, he had become the movement’s symbol. He was by then in Israel but came to the U.S. to speak in Washington that day and galvanize the movement.

The Jewish world was not without internal disagreements even then: Sharansky pushed for a huge rally in Washington timed with the first summit between president Ronald Reagan and Soviet premier Mikhail Gorbachev.

Some Jewish leaders disagreed, fearing that a low turnout would undermine the cause and fail to pressure Reagan and Gorbachev to act. But ultimately the disparate Soviet Jewry movement leaders overcame their differences and brought a quarter of a million people to Washington in protest.

The day after the Freedom Sunday rally, Reagan raised the issue with Gorbachev.

“Yesterday I had 250,000 people in my backyard saying, ‘Let my people go.’ Until you do what they want, nothing will happen,” Reagan said.

Of course, Gorbachev and his successor Boris Yeltsin ultimately relented, and the subsequent emigration of Soviet Jews to Israel and to the United States changed the course of history and presaged the ultimate collapse of the Soviet Union itself.

Much attention has been paid, appropriately, to the impact of the Soviet immigrants on the State of Israel. But the same is true of the impact on North American Jewry. Today, America is home to 750,000 Russian-speaking Jewish citizens, one-tenth of the Jewish population of the United States. From Sergey Brin of Google to Grammy nominated-musician Regina Spektor to best-selling novelist Gary Shteyngart and hundreds of thousands of teachers, doctors, lawyers, businesspeople of all kinds. Russian-speaking American Jews have made an indelible mark on American culture.

Of course, as with any large immigration that brings people with different languages, traditions and practices together, full integration into Jewish communal life takes time and effort. Our organizations need to learn and adapt. Though this is an effort of decades, it is not over – not by a long shot.

We are proud that the Genesis Philanthropy Group and the Jewish Federations of North America, building on years of work by local Federations, synagogues, schools, Jewish community centers and more, have created a new and deeper partnership. Learn more about our work here.

We are committed to re-energizing the effort to make sure that all Russian-speaking Jews in North America are able to access the very best of Jewish communal life and that this Jewish communal landscape can be enriched by their influence.

Back on December 6, 1987, we didn’t know if we could change the world. Today we know we did, and we can. Let us remember this lesson, as we brace to take on the challenges to come.

Marina Yudborovsky is the CEO of the Genesis Philanthropy Group. Eric D. Fingerhut is President & CEO of JFNA.

This article was originally published in The Jerusalem Post​.