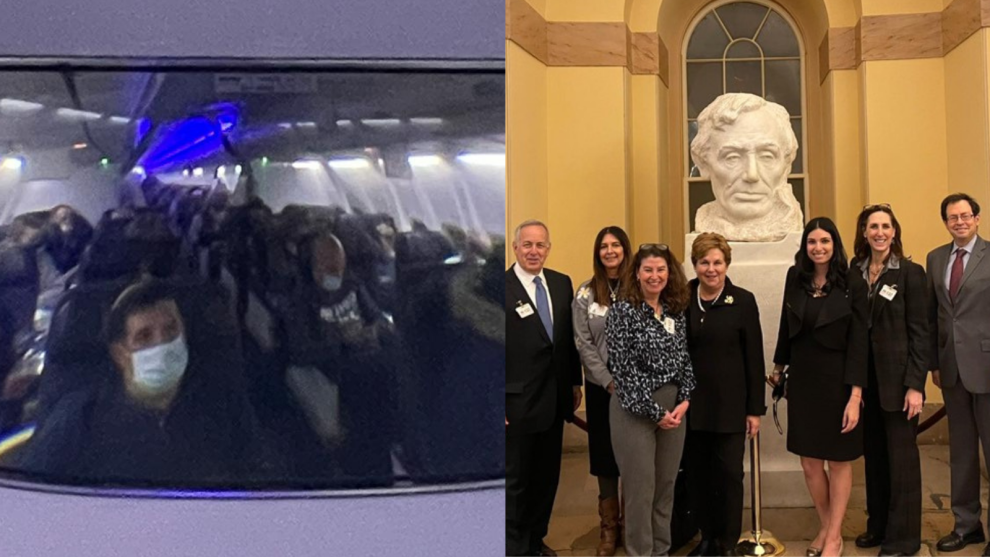 Today is what I believe news producers call a “split screen” day.

I am writing to you from an El Al flight carrying Ukrainian refugees to their new home in Israel. These new olim are the latest participants in one of the greatest stories in human history – the establishment of the modern Jewish State and the ingathering of the Jewish people from wherever they are in distress.

You cannot escape the weight of history on this flight. Today’s refugees are the direct descendants of the Holocaust survivors who against all odds made it to Zion, of the Jews who escaped from behind the Iron Curtain, and of those who came on eagles wings from Ethiopia in Operation Solomon.

While I travel with those who have escaped mortal danger and are being brought by their brothers and sisters to a new life in Israel, our Federation leaders are walking the halls of the US Capitol, urgently asking Members of Congress to support extraordinary aid to Ukraine and to open the doors of the United States of America to yet another wave of immigrants seeking safety and freedom.

The Jewish Federations of North America are in Washington today for the same reason I am on this plane - because there are Jews at risk, and because, as Jews, we believe in freedom and opportunity for all who face danger in their place of birth. Together with our commitment to community and Jewish life, our connection to the Jewish people worldwide and our expertise in public affairs are the three pillars that enable us to build and sustain flourishing Jewish communities.

It is true that today’s “split screen” is happening because of the great emergency caused by the Russian invasion of Ukraine. But the fact that this an emergency does not mean that this work is spontaneous. Far from it.

Communities do not wait until there is a fire to build a fire department, and the Jewish people do not wait until there is an emergency to create an effective system of rescue and humanitarian aid. The skill and expertise we have been witnessing in the relief efforts in Ukraine and in the bordering countries is the result of years of experience, training, relationship building, and fundraising.

Though there are many donors to thank, Jewish Federations have been supporting the essential organizations of Jewish relief and rescue – the Jewish Agency for Israel and the Joint Distribution Committee – year in and year out for nearly a century. In 2021 alone, when there was no humanitarian or refugee crisis, the 146 Jewish Federations and dozens of smaller independent communities provided the Jewish Agency and JDC with well over $100 million in core support, and tens of millions more in specific project funding. That is why the Jewish Agency and JDC are able to do the extraordinary work they are doing in Ukraine, saving lives and caring for the most vulnerable. And Federations have already raised an additional $20M in emergency funds on top of the annual support.

The same is true of our work in public affairs, which every Jewish Federation supports continuously with their time and resources. Understanding the important decisions that our governments are making and educating elected officials about our community is an investment that, like humanitarian relief, must be made year in and year out, in good times and bad.

The response of the Jewish community to the crisis in Ukraine was not planned, but it wasn’t unplanned either. Without knowing when or where such a calamity would occur, we prepared and we were ready.

Today, the Jews of Ukraine are flying to freedom and a new life in Israel, while Jews in the United States are petitioning their government to accept all the refugees from Ukraine. This is both a miracle and a result of hard work, dedication and unwavering commitment. How blessed we are to have the privilege of serving the Jewish people at this pivotal moment in history.

Eric D. Fingerhut is President & CEO of The Jewish Federations of North America